(1) PROBLEMS WE WERE SOLVING WITH THIS PROJECT In 2013 our family acquired a 23 acre property that was the first site where EAB was detected in Monroe County. From what we have learned, in an attempt to control the EAB the Ash were all cut, and apparently so were the accessible Oaks and Black Walnut of any value under the direction of the DEC.

What was left was a "Slash-Swamp-Void", which nature quickly filled with a collection of some dogwoods and grapevines, but mostly invasive species, such as Multi Flora Rose, Buckthorn and Honeysuckle thicket. 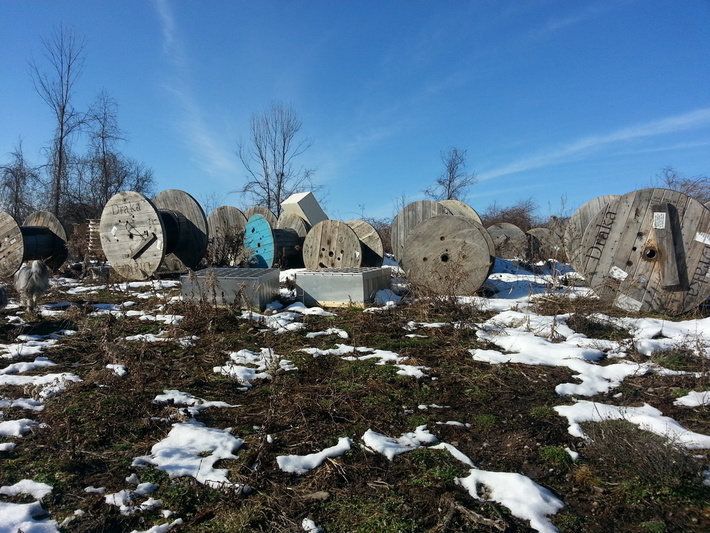 The property became a bit of a dump with abandoned truck, appliances and cable spools, etc.

There was about 13 acres of land with most of the valuble trees removed and 10 more with some larger oaks and black walnut along the riparian zone. Both areas had Multiflora Rose, Buckthorn, Poison Ivy and Grapevine.

Our goal as a family project was to turn this property into productive Silvapasture for sheep. To do this we determined that we needed to 1) clear invasive species and establish graze areas for rotational grazing, 2) develop windbreaks by establishing trees and shrubs. 3) correct some issues with erosion.

(2) DETERMINED ACTIONS TO CORRECT THE PROBLEM 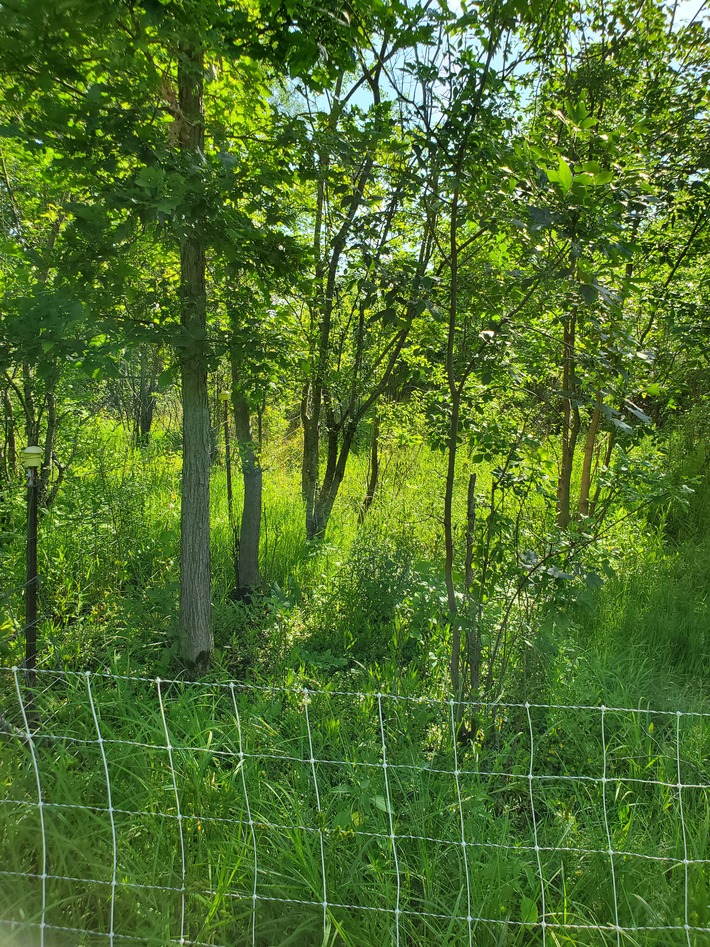 The next 2-3 years we worked on fencing and removal of invasives of 18 acres. A 4' woven wire perimeter fence was installed enclosing 18 acres of which 13 acres were cleared of relatively small invasives (where the Ash and Oak had been removed)  and seeded for grazing. 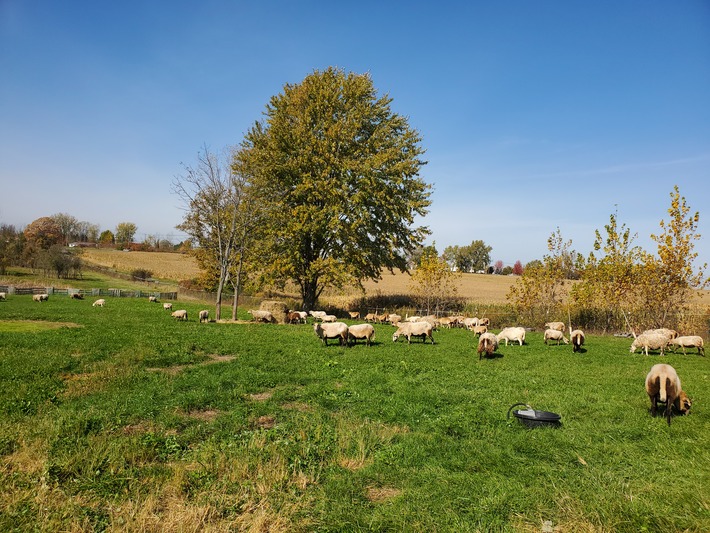 A problem remained that there were few trees remaining in this area to provide shelter for graze stock.  We need tree groupings and windbreaks in this area. 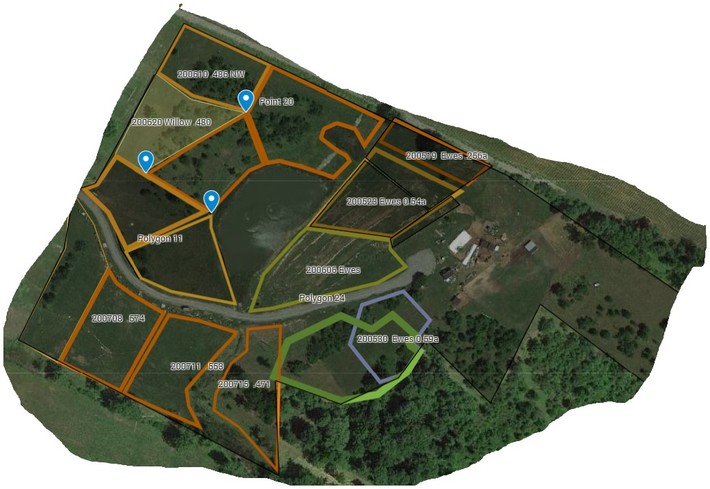 Next we developed a plan for rotating stock through this 13 acre fenced area during the graze season to control the regrowth of invasive species. Google maps (My Maps) was extremely useful for this phase of the project.  This involved installing a system to water the animals in each paddock during the graze season. In addition we needed to provide more substantial shelter, feeding facilities and watering during the winter that could withstand a significant snowstorm.

(3) WHERE WE ARE ON THE JOURNEY In the first part of this project we wanted to establish windbreaks with trees and selected shrubs in the cleared area of the property. The difficulties arise from the times when sheep get loose and chomp the seedlings, the voles that inhabit the area and the deer passing through. The trees we plant need a lot of protection.

Using the pallets that were left on the property we started a fenceline and planted oaks we started from acorns collected on the property. These are now 4 years old. They are protected from the grazing sheep when they are in the paddock on the other side. Most of the year we have protective mesh in front of them also. Looking down the line here you can see other oaks starting to poke up over the height of the pallets. The next part of this project involves clearing the invasives from the "Back-9" to be used as Silvapasture in the summer.

This last year we turned our attention to the remaining 9 acres which had very large (6' high)  Multi Flora Rose thickets amongst the Oak, Walnut and standing dead Ash that had somehow escaped the DEC action. This area was of particular interest to us since it could provide shaded graze of stockpiled grasses during the hottest part of the summer July and August when the cool season grasses would slow down.

April of this year we contracted with a Fecon operator (Future Forests) and explained our vision. We had previously discussed this project the year before with Monroe County Soil and Water Technician, Jeremy Paris. 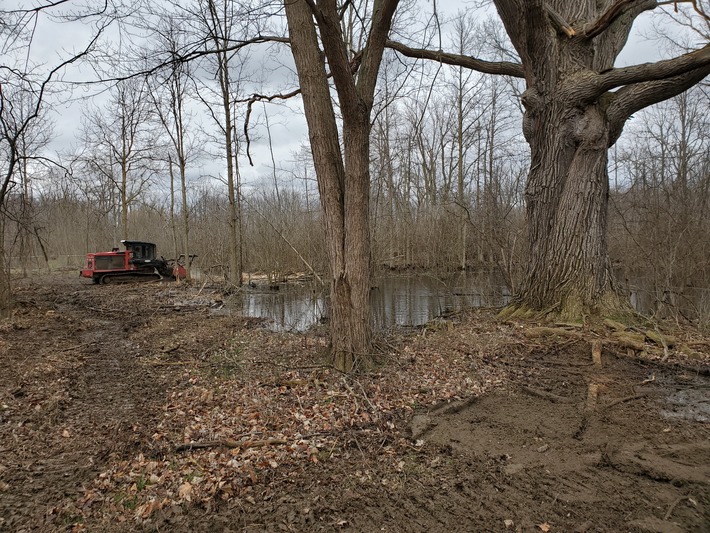 The Fecon operator quickly understood what was needed and he was also quite careful about the concerns we had regarding the designated wetlands.  In 2 days the Fecon cleared the huge Multiflora Rose, most of the Poison Ivy and grapevines in the "Back-9" . He took down the dead Ash and left the Oaks, the Walnut and Basswood. After this treatment of removal of large invasive vegetationi we had to remove a tree hugging poison ivy, grapevine and small multiflora rose. These small nasties were too close to trees to remove with the big machine. We used a Husqvarna 345 FR with a Renegade hybrid blade.  Stumps were treated with Crossbow.

We still have piles of multiflora bramble we plan to burn this fall. 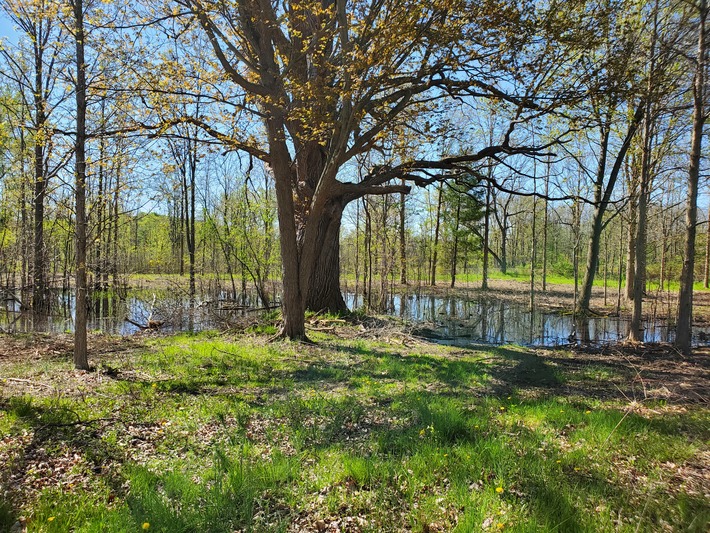 He returned in a few days and seeded the area with seed we supplied.  We made a mixture of Perennial Tetraploid ryegrass, Forage Bluegrass and Crimson clover. 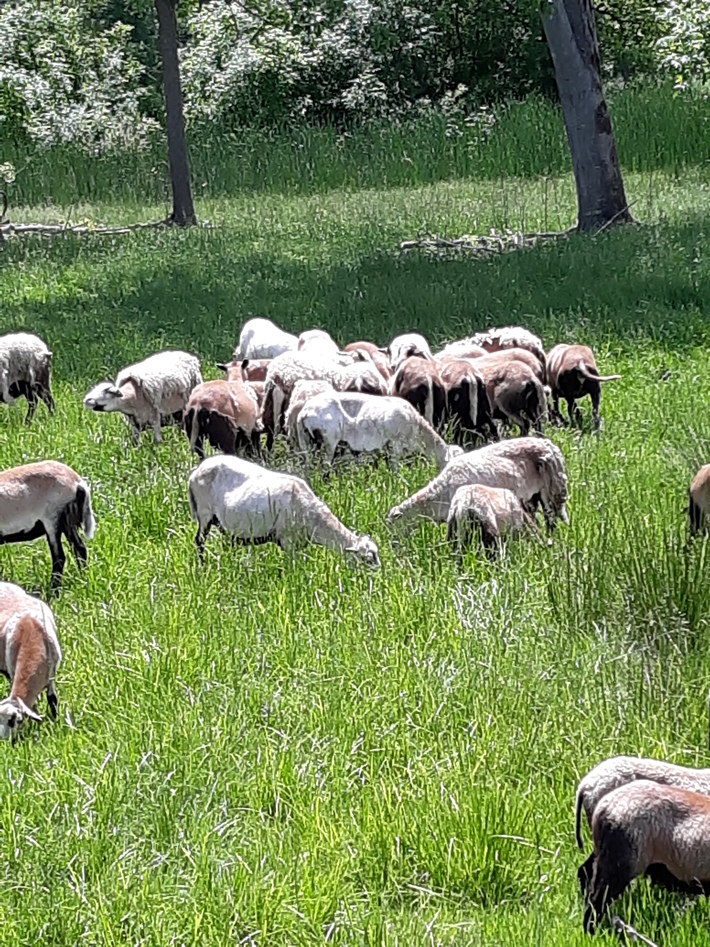 Needless to say, with the late spring, our rotation plan has been hopelessly delayed and the stock are still working around to the newly cleared area. But since the installation of fencing there has also been delayed, we are racing to make both become a reality before August.