Winter Storm "Hercules" is blowing its way through our region today with lots of snow and sub-zero wind chills.  This weather reminds me of an often-asked question about "living barns", or the use of wooded areas to shelter livestock during extreme weather.  Silvopastures clearly provide favorable microclimates for grazing animals during hot weather, but what about the cold?

The main difference in my mind between silvopastures and "living barns"  - or shelter areas - is that one is managed primarily for timber and forage production, while the later is managed primarily to shelter animals from extreme weather.  Some of the subtle differences between the two include: tree species composition; tree stocking (density); and when it is used by livestock.  The tree component in silvopastures can be deciduous and/or coniferous, but not all species are created equal when it comes to allowing forage growth beneath - nor for the degree of shelter they offer animals.  At a given stocking rate (expressed in square-feet of basal area per acre), shade-tolerant species with dense crowns and superficial, fibrous root systems (hemlock, spruce, beech - to name a few) will have a greater suppression effect on forage growth due to less sunlight reaching the ground and more root competition.  But these same trees may provide greater protection from the elements - especially in the case of evergreens in the winter.   Dense-foliaged conifers with deep, low crowns would provide the greatest degree of protection, but least amount of forage growth.

The picture below illustrates the effect that a species like hemlock can have on the herbaceous understory.  This is a mature hemlock with 40+ feet of clear stem.  There was probably more sunlight reaching the ground beneath its crown than in the sugar maple stand directly behind it.  But the root competition, which appears to extends out to about the radius of the crown, has lead to an understory of broad-leaved, deep forest plants directly beneath the hemlock.  By contrast, a mix of cool season grasses can be seen growing beneath the maples.   This picture was taken on May 8th. 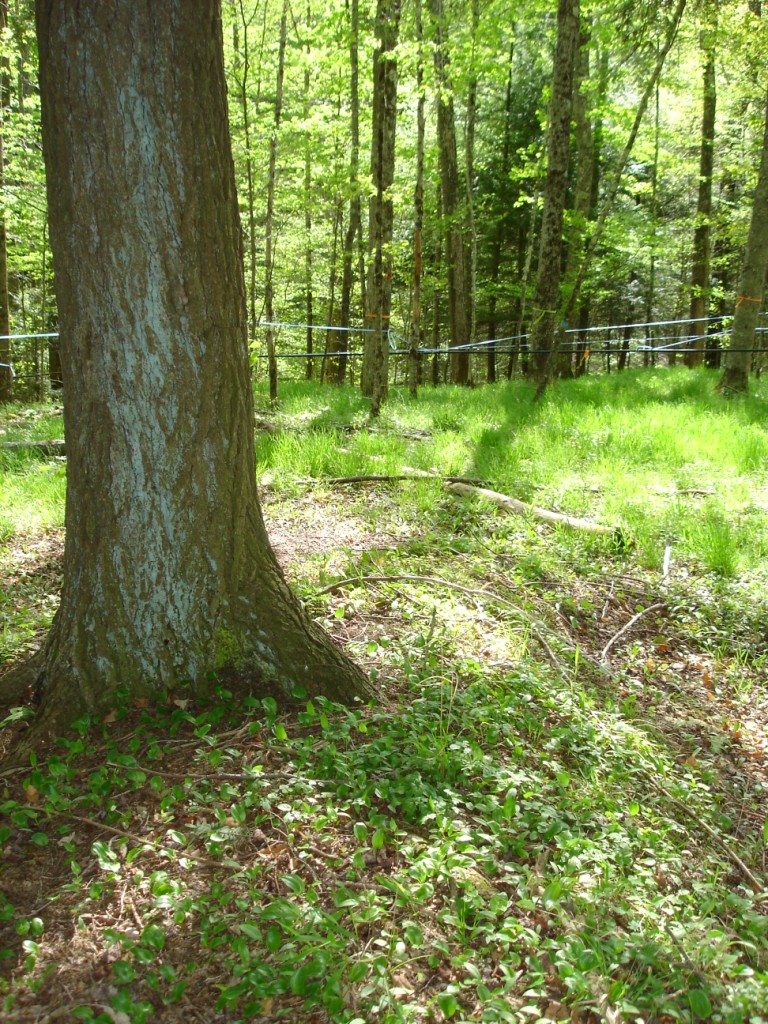 Does this mean that we should cull all hemlocks from silvopastures?  Certainly not, especially if wildlife habitat diversity is a significant objective.  This same hemlock happened to be a preferred roost tree for wild turkeys due to its location and crown structure.

Despite the emphasis on shelter vs. forage production, living barns still require the same general management rules of thumb as silvopastures:

The picture below is one of several shelter areas on our farm.  This is a 4 acre plantation of spruce, fir, larch and pines that is sheltered from the predominant winds and near a stream that provides winter water.  We keep a ~ 3 day supply of hay in this and the other "barns" to protect livestock during winter storms.  The goal is not to use any of the areas more than 1 - 2 times per winter - and exclude them from these areas the rest of the time. 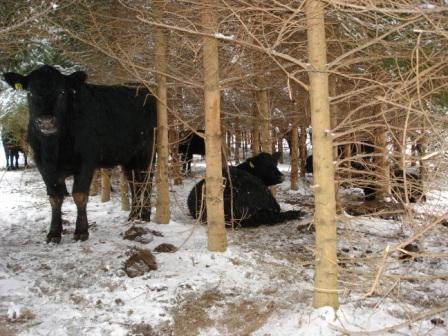 Whereas this shelter should be adequate for most cattle and sheep, it would probably not be a suitable alternative for a roofed shelter for animals that are more susceptible to wet, cold weather (goats, some horses).

Even areas managed as silvopastures (less tree density, greater forage growth in the understory) provide benefits that extend into the winter months.  The picture below shows a mixed conifer plantation managed primarily as a silvopasture (vs. a living barn).  This picture was taken in early December after nighttime temperatures in the teens.  Note that the grass beneath the trees was not frosted, thus helping to preserve its quality.  And although the temperatures on nights like this aren't necessarily uncomfortable, most animals can be found bedding down beneath the trees. 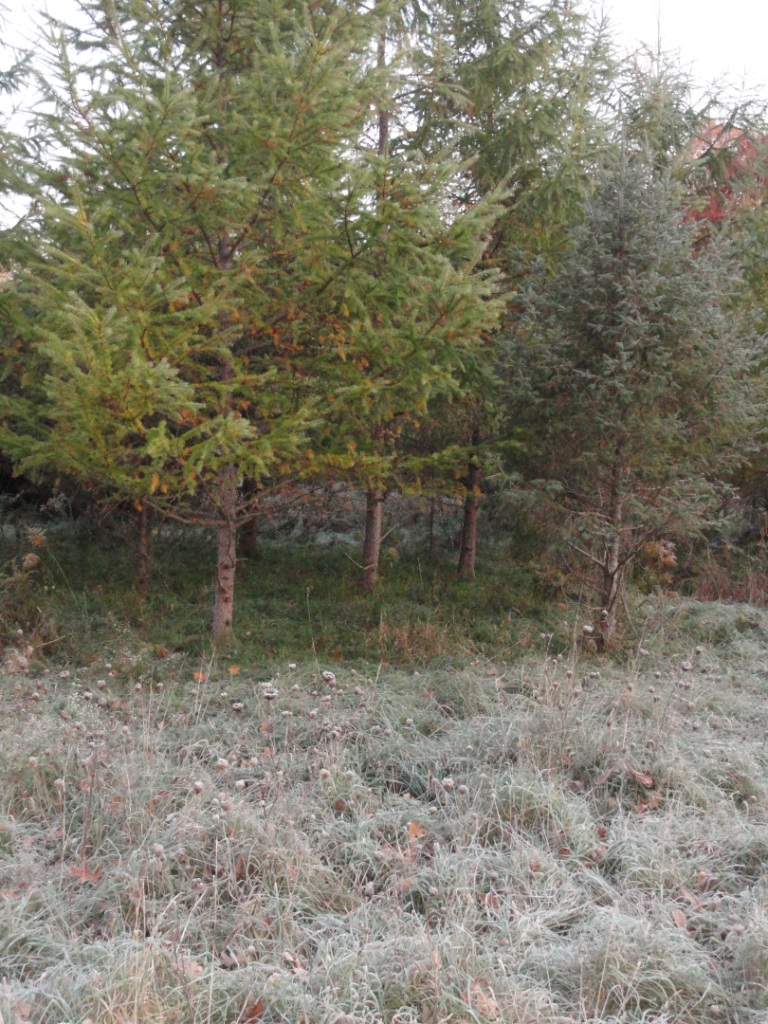 Charlie Feldhake from the USDA ARS lab in Beaver, WV studied the effects of silvopasture canopies on ground level temperatures and found a significant amelioration of extremes.  The primary difference in the summer was reduced solar radiation, which led to lower temperatures.  In the winter, the trees helped block the radiative cooling from cold, clear skies.

My experience with "living barns" on my dairy farm over 20+ years found that it was most effective to utilize a sacrifice pasture next to the evergreen "paddock" for the winter bedding area. The evergreens provided a windbreak which is more important to the cattle than protection from the cold or snow.  The evergreen paddocks, with round bales scattered throughout was limited to one or  two visits during the worst weather (usually winter rain events, but the icing led to other (fence) problems.   These sacrifice paddocks are ideal places for summer annuals to incorporate into the summer rotations.

My concern with rotating through silvopasture paddocks or most any other good pastures during the winter is the damage from compaction from the animals, and for the most part, I would reccommend just keeping them out during the winter.

My goat herd never experienced a living barn during the winter because of their ability to out eat their welcome no matter where they were except for very short duration invasive control. If kept them moving enough, there was just not enough time for them to destroy too much. Unfortunately,  enough repeated visits to actually control the invasive plants usually also resulted in control of everything else 2 inches in diameter or less that was not wrapped in chicken wire.

Our objectives are key to how we manage each individual system. Hemlocks certainly are a tree of choice as a living barn, but not so much for forage production. But the ecosystem services they provide warrant their existence even in a hardwood stand managed for hardwood production. They can provide a moderating effect from winters desiccating winds for the other trees as well as for windbreaks for animals. This may be especially important during the transition period as we thin the tree stands to try to get more light to the ground to get forage growth.

March seems to be the most challenging month of the year in upstate NY for keeping animals out on pasture due to the extreme weather swings and rapidly changing ground conditions.  Take this week for example:  On Tuesday it was 55 degrees and the ground thawed just enough to absorb some of the heavy rains on Wednesday morning.  By Thursday morning we had 10" of fresh snow (on top of the still thawed ground) and temperatures were back in the teens.  Today (Saturday), temperatures will be back near 50 and even the cats and chickens are making mud.  Cold will return to the area tomorrow.  We all know the scenario.

When March storms roll through it's tempting to "run for shelter" and move the herd into protected areas like a silvopasture or "living barn".  This week would have been a good example of where it would probably make sense to get animals to a barnyard or sacrificial area.  But when that's not an option, there are a number of things that we can do to minimize damages and long-term productivity to our pastures and silvopastures.

The first is to keep the herd moving quickly.  Lighter damage across extensive acreage is likely to recover quickly.  Concentrated damage that exceeds a particular threshold (different on every site and circumstance) will usually be much slower to recover.  This is particularly important in silvopastures where tree roots are a concern.  The susceptibility of tree roots to soil compaction and mechanical injury from hooves sinking into soft ground will depend on numerous factors such as tree species and age, soil type, ground conditions and the duration, density and hoof pressure of the livestock.  Tree bark is also "loose" this time of the year and therefore much more susceptible to damage from rubbing and chewing - so don't let animals linger in one area too long.  Bored and restless animals are usually destructive animals.  Keep them moving and focused on eating fresh supplies of hay or pasture.

The second is to anticipate mud conditions and plan to move the herd into less vulnerable areas during those situations.  Some of our paddocks have well-drained gravel moraines running through them - which is where we are trying to keep them until things freeze up or dry out.  This strategy requires carefully monitoring the weather and ground conditions.  Prior to Wednesday afternoon's snow storm I walked the 4-acre mixed conifer "living barn" area in the background of the picture below and realized that the ground was still frozen solid under the trees, despite being mushy out in the adjacent pastures.  We had held this area in reserve for just such an occasion and moved the herd (120 head) into the "living barn" as the temperatures started to drop and the snow started piling up.  I took this pictures on Thursday morning and the cows were still contently eating in the shelter of the trees.  Today they are back out on pasture grazing the bales seen to the left on "high and dry" gravel ground.

And finally, despite our best efforts sometimes we're just going to tear up some paddocks including our prized silvopasture and living barn areas.  Trees and wood are remarkably resilient.  They can tolerate drought, significant storm damage and heavy defoliations from insect outbreaks and hail,  However, these harmful impacts usually only happen periodically - with long periods of rest and recovery in between.  Trees can generally tolerate the periodic stresses ok.  But when drought is followed by winter ice storm damage and then a tent caterpillar outbreak the following summer we would expect to see greater decline and mortality in the trees (though it may take years to manifest itself).  Same is true of beating up on wooded areas with livestock during poor ground conditions.  Heavy impacts once in a great while will not have the same long-term negative consequences as putting the herd in the same living barn or silvopasture area every March during the height of mud season.

A good winter to have some "Living Barns" on the farm.  This article recently appeared in OnPasture magazine: