Role of Silvopasturing in "Saving the Planet"

Thanks to Erica Campbell from Senator Sander's office for sharing with our "Northeast Silvopasture Initiative" group...

(Brett's comment: I'm just impressed that a book author even knows what silvopasturing is!)

From the "Morning Ag Clips".  My first reaction was why the Brazilians are utilizing more silvopasturing?  Having seen similar large-scale land clearing occur in northern Argentina in the early 2000's, my guess is that it's simply more economical to clear everything in the pasture conversion process than to selectively leave trees.  When a change in the country's currency made it very feasible to clear land for row crop production in the Chaco Region of northern Argentina starting around 2002, the standard method was to drag a chain a few feet below the soil surface between two massive bulldozers.  This would sever the tap roots and make large trees (in this case, mostly species of Prosopis, or "Mesquite") easier to push out and pile in large windrows for later burning.  the process took about two years from initial clearing to planting.

A couple of recent articles below that have come across my inbox.  My intent isn't to start a debate on the political angles of these topics, but rather show the value in creating more sustainable grazing operations in our own backyards.  No surprise that the first one comes out of Michigan State University, who are leaders in pasture-based livestock production.

EAST LANSING, Mich. — Trees falling as fragile forests become cropland is a visual shorthand for the environmental costs exporting countries pay to meet lucrative global demands for food. Yet a new study reveals a counterintuitive truth: Importing food also damages homeland ecology.
In this week’s Proceedings of the National Academy of Sciences, researchers at Michigan State University (MSU) and their colleagues show that the decisions domestic farmers must make as imported food changes the crop market can damage the environment.
“What is obvious is not always the whole truth,” said Jianguo “Jack” Liu director of MSU’s Center for Systems Integration and Sustainability and senior author of the paper. “Unless a world is examined in a systemic, holistic way, environmental costs will be overlooked.”
The researchers examine the global trade of soybeans – a demand which has exploded in China as its population becomes more prosperous. To meet the demand for soybeans as animal feed and food products, China’s market gobbled up more than 60 percent of the world’s exported soybeans, much of that from Brazil- and at a price Chinese farmers can’t match.
Brazil’s massive conversion of rainforest and Cerrado to cropland has received much attention, and policies have been enacted to mitigate the environmental damage there. The widely held conclusion has been that importing countries gain environmental benefits and displace environmental costs to the source of food. This paper shows that the shift is actually just an exchange
“This research demonstrates a surprising environmental impact of global agricultural trade,” says Betsy Von Holle, a director of the National Science Foundation’s Dynamics of Coupled Natural and Human Systems program, which funded the study. “If the importing country switches from a more sustainable crop, such as soybeans, to one that needs more water and nutrients, such as corn, the nitrogen pollution that results can harm the environment of the importing country.”
The research team analyzed more than 160 studies across six continents on the nitrogen left in the soil after a crop is harvested, and looked at the nitrogen change that resulted in the top countries such as Vietnam and Japan that imported soybeans from the world’s two largest soybean producers and exporters – Brazil and the United States.
The group also did an intensive study of the soil in China’s top-producing cropland in the northeast. They found that the largest increase in nitrogen pollution there was in fields that had converted from soybeans to rice paddies, followed by corn fields.
Soybean trade offers but one example of the unexpected environmental impacts of global food trade – and a heads up that negotiations of trade agreements need complete information, the paper notes. For example, once-upon-a-time cornfields in Mexico and South America now grow vegetables, and demand more nitrogen inputs, thanks to influxes of cheap American corn. And nitrogen isn’t the only change. Crop decisions driven by global markets also can place increased demands on water supplies.
“This study underscores the need to pay attention to both sides of international trade not rely on conventional wisdom,” Liu said. “The framework of telecoupling – a new integrated way to study human and natural interactions over distances – shows us unexpected outcomes that can stand in the way of sustainability.”
—Michigan State University

The second story (too long to copy, but worth a read): 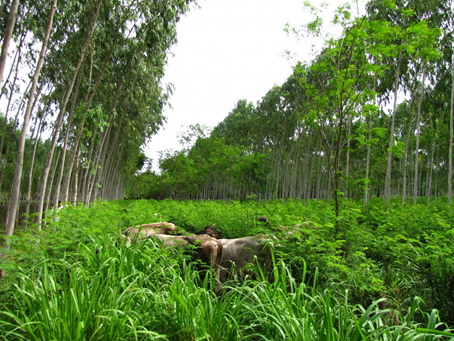 Eric Toensmeier is a lecturer at Yale University and a senior researcher with the climate change-focused nonprofit Project Drawdown. He is the author of “The Carbon Farming Solution.”

When I began investigating how to capture carbon dioxide to fight climate change a decade ago, I had no way of knowing which tool would have the greatest potential. Years later, in 2015, when the environmentalist and entrepreneur Paul Hawken hired me to work forProject Drawdown to help model the impacts of 23 land-based climate change solutions, many on our team were surprised when a relatively unknown solution called “silvopasture” emerged as the most powerful agricultural production practice — the ninth most powerful method overall.
Silvopasture systems combine trees, livestock (ruminants like cattle, sheep and goats) and grazing. Ranchers and pastoralists plant trees or manage the land for spontaneous tree growth. The trees provide shade, timber and food for livestock. In most silvopasture systems, the carbon captured in soil and trees more than makes up for the greenhouse gases (methane and nitrous oxide) that ruminants emit through belches and flatulence. One study of intensive silvopasture in Colombia found that emissions from livestock were equal to a quarter to half of the carbon sequestered in soil and biomass.
At first, adding trees to grazing land seems counterintuitive. Won’t the trees shade out the grasses below? Surprisingly, well-designed silvopasture systems actually increase production of meat and milk, in part because the shade from the trees reduces stress on livestock. Intensive silvopasture can more than double production of meat and milk on the same area of land.
Though little known to the public, silvopasture is currently practiced on an estimated 15 percent of the world’s grazing land. Yet scarcely a word about the method is found in key climate change documents and agreements. When it is mentioned, it is lumped in with other “agroforestry” practices that integrate trees with crops and sometimes livestock. Cropland agroforestry has recently been shown to have a much greater climate impact than previously believed.
Livestock production is a major source of greenhouse gas emissions. Over14 percent of human-caused emissions are the result of livestock production, with methane from ruminant livestock like cattle the largest contributor. Grazing systems are responsible for 20 percent of this, though they only produce about 4 percent of the global meat and milk supply.
There has been much discussion about improved, or “managed,” grazing systems to mitigate grassland climate impacts by modifying the intensity and timing of grazing. This is indeed important, but the impacts per hectare are usually very modest — it is the great extent of global grasslands that acts as a multiplier. Project Drawdown found that silvopasture can have double the global impact of managed grazing, on only a fifth of the land. Long-term storage of carbon in silvopasture soil isup to five times higher than managed grazing alone — not to mention the carbon stored in the biomass of the trees.
Silvopasture is not the solution for all grazing land. In many cases, grasslands are too dry to support healthy tree growth. Other limitations include high establishment costs, the resources to choose the right tree species (and the right spacing between them) and often a significant learning curve for livestock producers to learn to care for the trees. A final and serious drawback that silvopasture shares with other land-based carbon storage practices is that this stored carbon can be lost if the land is degraded, which can happen due to human mismanagement but also as a result of climate change itself.
Could silvopasture make beef climate-friendly? On a given piece of land, yes. But without serious deforestation, there’s just not enough land in the world to meet global beef and dairy demand with silvopasture and managed grazing alone. Americans consume 50-60 grams of animal protein per day, with much of the rest of the world trending toward greater livestock protein consumption. Improved grazing systems, including silvopasture, can probably only provide enough for 7-18 grams per person per day. Making livestock production more climate-friendly must go hand-in-hand with reducing demand through diet change and cutting back on food waste if aggressive climate targets are to be met.
How much land is potentially suitable for silvopasture? More than one-fifth of our planet’s 3.5 billion hectares of grassland is humid, with more than enough rainfall for tree growth. Appropriate tree species can be grown in some of the drier areas as well. Project Drawdown has called for an additional 73 million hectares (about 2 percent of global grassland) of silvopasture by 2050. This land could remove and store roughly 31 billion tons of carbon dioxide between 2020 and 2050 — the same impact that Drawdown projects for rooftop solar and commercial LED lighting combined.
What needs to be in place to achieve this goal? For ranchers and pastoralists, access to finance and information are key. It can take three to four years to recover the costs of converting land to silvopasture. Not only ranchers and pastoralists but also policymakers, lenders and researchers must overcome the psychological barrier against growing trees on grazing land.
Recent decades have seen an explosion of silvopasture in Latin America. The Costa Rican, Colombian and Nicaraguan governments all offer payments to ranchers to convert to silvopasture. In Costa Rica, a remarkable 90 percent of pastures now incorporate trees. The Colombian National Federation of Cattle Ranchers has embraced silvopasture.
Most scientists agree that there is still time to step back from the precipice of catastrophic climate change — but doing so requires profound and rapid changes in all sectors of civilization. Grazing of livestock — the world’s largest land use — is no exception. We should be working together now to add trees to pasture and rangeland, wherever it is feasible.
Silvopasture belongs at the center of international efforts to address climate change. This year, the Intergovernmental Panel on Climate Change is writing a special report on climate change and land. The team of researchers working on the report should not miss this important opportunity to explicitly discuss silvopasture. Let’s not leave one of our most powerful tools off the table any longer.

This was produced by The WorldPost, a partnership of the Berggruen Institute and The Washington Post.

An nice example of how silvopasturing makes sense just about anywhere that trees & forages can be grown together:…Continue